Souls Around the World Blog Hop 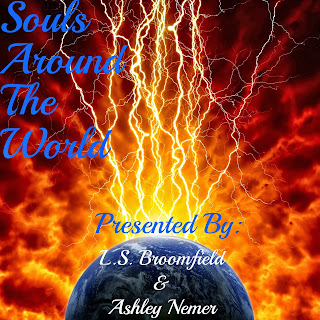 I racked my mind on what to write about, then it came me, ghosts. Yes you heard me right, ghosts. My family has been in touch with them and even two ghosts my aunt and uncle who passed away many years ago, haunt their daughter and husband who just so happens to live in their house and my uncle actually died there.

A few months ago my cousin told us somethings have been happening in the house, pictures being moved, she could smell my uncles cologne near her, and my aunt has actually appeared to my cousin's husband three times now, once she was even in bed lying with them. My aunt was worried her youngest daughter wouldn't be taken care of, and we think that is why she is appearing more so than my uncle. My cousin has found a great guy but who knows why she still hasn't passed on.

My brother works for the National Park Service and has worked at my park sites that have been claimed to be haunted and have come across hearing noises, footsteps, things being dropped but nothing like my cousin has experience.

In case this code produces unexpected results, please try the code below:

Email ThisBlogThis!Share to TwitterShare to FacebookShare to Pinterest
Labels: Souls Around the World Blog Hop